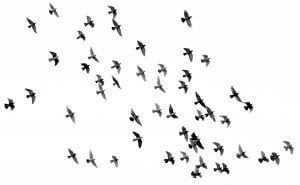 What is the current status of HPAI H5 avian influenza spread in North America?

As of May 12th, avian influenza has spread from the Atlantic Coast to the Pacific Coast. However, cases on the Atlantic Coast have decreased dramatically as the continent moves further into spring. In the United States, case numbers are highest in the northern Great Plains, Great Lakes, and Rocky Mountains. Positive tests have been reported from 34 states and 9 provinces. While the disease is being found in new regions, cases are declining across the board.

How many birds have been affected by avian influenza?

The USGS and USDA are reporting approximately 8,500 wild birds have tested positive for this virus. The Environment and Climate Change Canada agency has reported 238 positive samples for avian influenza virus in wild birds. The majority of impacted species are waterfowl and raptors.

While wild birds have seen some mortalities, the burden of this disease has fallen hardest on poultry growers. Domestic fowl are seeing losses in the millions. The CDC and CFIA report there is no food safety concern. Always cook poultry products to recommended safe temperatures.

Can avian influenza be spread to songbirds?

While songbirds can test positive for HPAI H5N1, most cases are due to each species scavenging the carcasses of deceased birds due to infection. Songbirds are not considered a significant reservoir for AIV, and populations of songbirds are unlikely to be severely affected. While songbird to songbird transmission may be possible, research suggests it is highly unlikely.

Are feeders dangerous to birds during this disease event?

Songbird to songbird transmission is a minimal threat to most species. If domestic fowl are kept on the same property as bird feeders, the most current advice is to remove those feeders until the threat is a non-factor.

Should bird feeders be removed?

If you have bird feeders and poultry on the same property, we recommend the immediate removal of bird feeders until the case numbers in adjacent areas are lessening. If you do not have poultry, follow the advice of your local or state agency as they will have the most updated information for your area. If your feeders remain active, we suggest following our #feedsmart recommendations for keeping birds safe.

When will the HPAI H5 threat be zero?

While the threat may never be zero for North America, a report from the World Organization for Animal Health indicates the number of cases of avian influenza fell precipitously during April. By June, most migratory birds will be nesting or defending territories, and the spread of the disease should be nearly diminished. If you live in the southern United States, your threat is currently at a minimum. If you live in the northern states or Canada, cases should make another drop in the next 2-3 weeks.

At this time, there has been only one positive human test for H5N1 in North America. The individual had mild symptoms and has recovered. This transmission was likely due to close contact with poultry as part of their daily routine.

We will stay on top of the situation, and we pledge to keep you informed of any developments of concern. Please contact info@wbfi.org if you have questions.